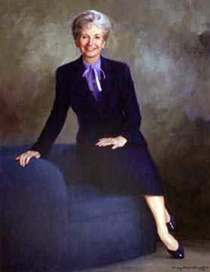 Mary Gates, a member of the UW Board of Regents for eighteen years (1975-1993), was a leader who promoted voluntary service and philanthropy, both locally and nationally. At her memorial service in June of 1994, then-UW President William P. Gerberding spoke of her capacity for “infectious, effervescent joy,” and her “largeness of purpose and spirit.” “She was a luminous presence and a powerful influence at this University and in the community,” said Gerberding.

At a time when women’s roles in society were changing rapidly, Mary Gates brought leadership to a broad spectrum of community endeavors, including education, the arts, government, health care, and major corporations. In addition to being a Regent of the University, Mary Gates served on the UW Foundation Board of Directors, the UW Medical Center Board, and the School of Business Administration’s Advisory Board. Her volunteer roles in Seattle and King County included serving on the boards of the Children’s Hospital Foundation, Seattle Symphony, Greater Seattle Chamber of Commerce, United Way of King County, and many other nonprofit organizations.

Mary Gates’ leadership was not limited to the non-profit world. She served for many years on the boards of directors of major corporations: First Interstate Bank of Washington; Unigard Security Insurance Group; Pacific Northwest Bell Telephone Company and later US WEST Communications; and KIRO Incorporated television and radio stations.

“She was a catalyst, a person who sought and often found common ground when it was not apparent to others,” Gerberding said of Mary Gates. “Everyone trusted her and respected her judgment. Her leadership was subtle, but it was steady.”