The Martin Family Foundation is dedicated to assisting talented community college students who wish to pursue a college degree at the University of Washington. The foundation exists through the generosity and vision of Benn and Claribel Martin. Benn Martin (pictured on the left with James Palmer, current Board Chair) 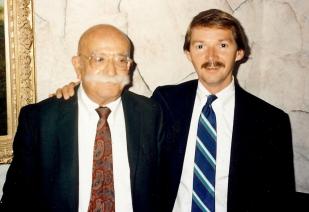 was a civil engineer who specialized in water and sewer treatment plants for large municipalities on the west coast, including Seattle and San Francisco. Claribel Martin was a parole officer for the City of San Francisco and dedicated her career to assisting individuals build new lives from troubled beginnings. After Claribel’s death in the mid 1980s, Benn Martin worked his remaining years to establish a foundation to distribute their assets in a meaningful way.